NEWS BYTE
PORVORIM
Goa beat Arunachal Pradesh by an innings and 336 runs, to keep their hopes of qualifying to the Elite Group of the Ranji Trophy alive, at the Goa Cricket Association (GCA) Academy ground in Porvorim on Wednesday.
Arunachal Pradesh who were bowled for 83 in their first innings – chasing Goa’s first innings total of 589 for 2 declared– were bowled out for 170 on the third day of play with Goa captain Amit Verma claiming six second innings wickets and nine in all. He was named the man of the match for the second consecutive home match.
Arunachal Pradesh, who started the third days play with three wickets down, could offer little resistance to the Goan bowling attack and folded soon after lunch.
Darshan Misal claimed two wickets whilst Felix Alemao and Amulya Pandrekar claimed one each.
Rahul Dalal was the sole Arunachal Pradesh batsmen who could offer resistance to the Goan bowlin with his 68 of 98 balls faced.
Goa is now on top of the Plate Group table with 37 points .

Goa wins by innings and 8 runs

December 20, 2019 admin Comments Off on Goa wins by innings and 8 runs 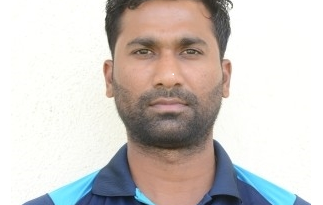