NEWS BYTE
Margao
Goa started their U-19 cricket season in style by beating Cricket Association of Pondicherry (CAP) by an innings and nine runs in the cooch Behar Trophy played at Margao Cricket Club (MCC) ground in Margao on Sunday.
Goa , coached by Rajesh Kamath, polished off the win in three days of the four day BCCI tournament.
Pondicherry had won the toss and had elected to bat and were bowled out for 145 in their first innings. Goa were bowled for 260 in their first innings , taking a first innings lead of 115 runs.
Pondicherry were seven for no loss at the end of second days play. However, Goa managed to bowl the visitors for 106 runs, thus capping their first win, in their first game.
Harsh Jethangi who had scalped six wickets of Pondicherry in the first innings, took four more in their second innings and was ably assisted by Rahul Mehta who also chipped in four Pondicherry wickets.Ruthvik Naik took another wicket.
So impressive was Goa’s bowling that four Pondicherry batsmen were out for a duck. Only three batsmen could cross the double figure mark.

August 22, 2019 admin Comments Off on GCA workshop for umpires 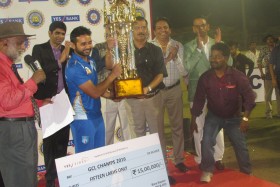