NEWS BYTE
PORVORIM
Goa bowled out Manipur for 106 in 32.1 overs and in reply was 225 for the loss of two wickets at the end of the first days Ranji Trophy (PLATE Group) match against Manipur at the GCA Academy ground in Porvorim on Friday.
Vijesh Prabhudesai was the toast of Goa taking six wickets and –claiming a hat trick in the bargain – to finish his ten overs with four maidens, and giving away 14 runs at an economy rate of 1.40.
Captain Amit Verma, Felix Alemao, Lakshay Garg and Amulya Pandrekar claimed the remaining wickets.
At close of play, Goa leads Manipur by 119 runs.
Opener Sumiran Amonkar scored a century for Goa and was dismissed for 115. Aditya Kaushik was out on 34 whilst Vaibhav Govekar was not out on 64 along with night watchman Amulya Pandrekar not out on 4. 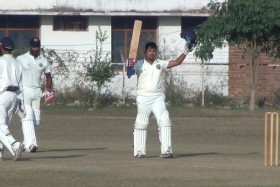 All set for First Ranji Tie

September 29, 2015 admin Comments Off on All set for First Ranji Tie

Goa bowl out Meghalaya for 203