NEWS BYTE
PORVORIM
Goa trail Kerala by 191 runs on the second day of the Vijay Merchant Trophy (south Zone) match being played at the Goa cricket Association (GCA) academy ground in Porvorim on Saturday.
Kerala declared their first innings on 366 for 2 leaving Goa to overcome 323.
Goa started cautiously and managed to bat through the day losing seven wickets for 127 runs at close of play on the second day. Goa now trails Kerala by 196 runs.
Darpan Pagui top scored for Goa hitting 34 runs from 114 balls. Sanath Nevagi was the second higjest scorer with 32 runs and Ayush karapurkar contributed 23. Captain Arsh sardesai attained the double digit mark with 10 runs and Veer Yadav made 16.
The Goan colts batted through 238 minutes (76 overs). 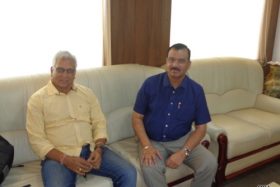 Mohinder Amarnath to interact with cricketers from Goa on Sept.15

September 14, 2018 admin Comments Off on Mohinder Amarnath to interact with cricketers from Goa on Sept.15

November 23, 2018 admin Comments Off on Goa with chance of win : Ranji Trophy

Vantamuri to lead Goa U-14 boys