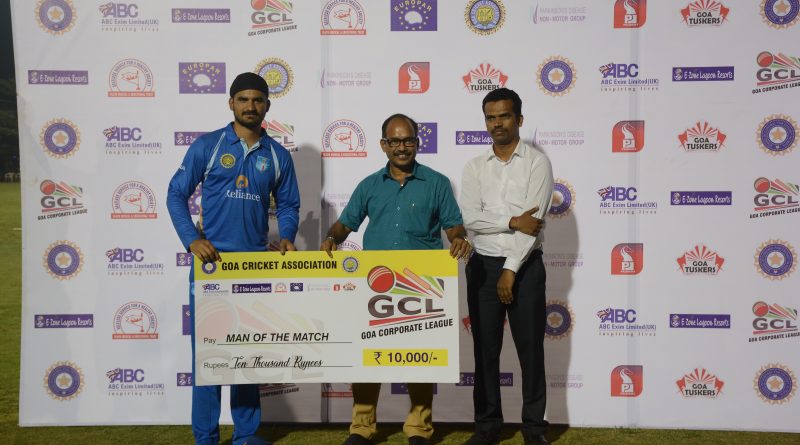 PORVORIM
Reliance A continued their fine winning form with an empathic five wicket win over Air India and became the first team to qualify for the semifinals of the Goa Corporate League being played at GCA Academy ground in Porvorim.
Air India were lucky with the toss and opted to bat and were at one stage cruising steadily with captain and wicketkeeper Bisla compiling thirty three runs along with Ankit Dabas.
Lalit Yadav consolidated the score further by remaining not out with a score of 55 with four fours and three sixes.
Man of the Match Tejinder started the batting for Relaince A with a quick fire 56 of 37 balls that included seven fours and two sixes.
Captain Saurabh Tiwari made another useful contribution with the bats by scoring 34 from 29 balls along with Nikhil naik who scored 31 to enable Reliance A to surpass the required runs in 19.2 overs.
GCA vice president Dr.Venkatesh Prabhudessai and Shamsundar Tilve presented the Man of the Match award.

December 1, 2018 admin Comments Off on Jharkhand beat Goa by 7 wickets