NEWS BYTE
PORVORIM
Chandigarh were 310 for the loss of three wickets at the end of the seconds day play against Goa in the Ranji trophy match (Plate group) at the Goa cricket Association (GCA) Academy ground in Porvorim on Monday.
Chandigarh leads Goa by 59 runs. Goa was bowled for 251.
Chandigarh who started the day with three runs on the board lost the first wicket on 31. Shivam Bhambri who is not out on 148 and captain Manan Vohra steadied the Chandigarh innings and batted through the major part of the day before the wicket of Manan was claimed two runs after he had scored his century.
Darshan Misal , Suyash Prabhudesai and Amulya Pandrekar were the successful bowlers for Goa- all claiming one wicket each. All three Chandigarh batsmen were caught, two by Lakshay Garg and the other by Snehal Kauthankar.

November 2, 2015 admin Comments Off on Goa in pole position 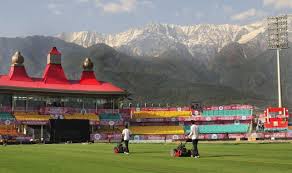