PORVORIM
Goa won their opening match of the BCCI Elite Group C U-19 women’s cricket match against Tripura by 131 runs at the GCA Academy ground in Porvorim on Monday.
Goa elected to bat after winning the toss and scored 236 for the loss of five wickets at the end of fifty overs. Amonkar Diksha top scored for Goa with 71 from 104 balls while Gawde Diksha was not out on 50 from 105 balls at the end of fifty overs.The duo scored 121 runs for Goa amongst themselves.
Shindiya Naik scored 29 of 45 balls whilst captain Tejaswini Duragaad scored 28 from 35balls.
Tripura were never allowed to get to a good start with the Goan women capturing wickets in regular intervals and the visitors were bowled for 105 in their allotted fifty overs.
Gawde Diksha scalped four wickets and was assisted by captain Tejashwini who captured two wickets. Shindiya naik, Tanaya Naik, Savali Kolambkar and Poorva Bhaidkar took one wicket each.
Goa finished with four points. 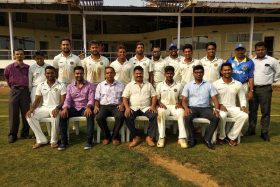 March 27, 2018 admin Comments Off on Dempo SC are GPL Champions

Selection trials for Girls U-16

November 20, 2018 admin Comments Off on Selection trials for Girls U-16