Dempo Cricket Club will be playing Geno Sports club in the inaugural match of the Goa Premier League – three day matches –scheduled to start at the Goa Cricket Association (GCA) Academy ground in Porvorim from March 15 .

The tournament is expected to be hosted at the GCA Academy ground, the GCA ground in Sanguem and the MCC ground in Margao.

The following is the draw:

The first semifinal will be played at the GCA Academy ground in Porvorim on April 4 simultaneously with the other one at the GCA ground in Sanguem. 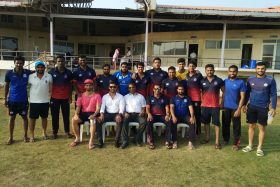