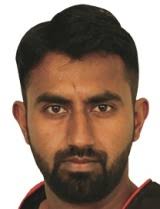 NEWS BYTE
INDORE/MP
Goa lost its first match of the 2020-2021 cricket season by six runs to Madhya Pradesh in the Syed Mushtaq Ali T20 match at the Holkar stadium in Indore on Monday evening. Goa won the toss and opted to field and host MP scored 214 for the loss of three wickets in the stipulated twenty overs. Goa managed to score 208 for the loss of 7 wickets. In reply, Goa appeared set to take their first match before wicket keeper cum batsman KD Ehnath was run out with Goa needed seven runs to win from the last two balls of the evening. Suyash Prabhudesai was the highest scorer for Goa with 48 runs from 22 balls followed by KD Eknath who contributed with 45 runs from 22 balls. Snehal Kauthankar chipped in with 31 runs from 23 balls to be the third highest scorer for Goa. Goa opener Amogh Desai contributed 22 runs from 22 balls whilst Aditya kaushik scored 12 and Lakshay Garg 15. Captain Amit Verma managed 2 runs from four balls before he was caught. Darshan Misal contributed 17 and last batsman in Deepraj Gaonkar scored one from the same number of balls faced. Rajat Patidar top scored for MP with 96 from 51 balls whilst Venkatesh Iyer scored 87 from 52 balls. Ashok Dinada scalped two wickets for Goa and Deepraj Gaonkar the other. Madhya Ptadesh have collected four points and Goa are yet to open their account.