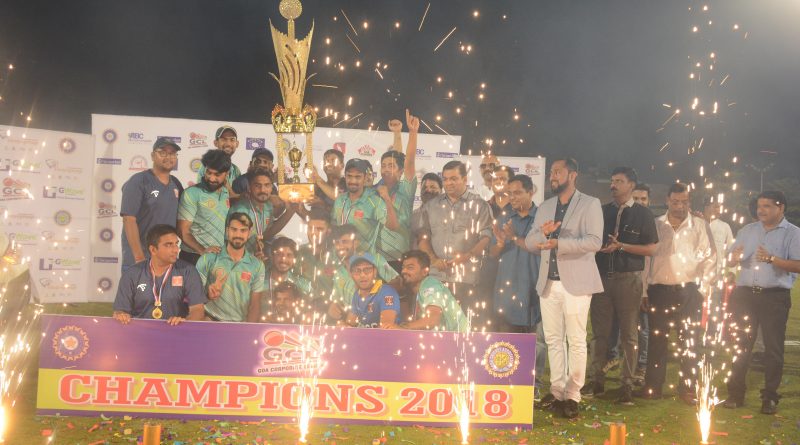 ONGC lifted the Goa Cricket Association (GCA), Goa Corporate League with a five wicket win over Reliance A in the finals at GCA Academy ground in Porvorim on Sunday.
In what was billed as the battle of the titans , ONGC won the toss and decided to put Relaince in to bat. The decision paid off as Relaince were restricted to 189 for the loss of eight wickets in their alloted 20 overs.
In reply , ONGC scored 195 for the loss of five wickets in 18 overs.
Reliance started pretty slowly with their first few batsmen unable to open the scoring with a burst.Openening batsman Tejinder made 25 followed by 39 by Naik Nikhil.Middle order batsman Jitesh Sharma was the highest scorer with 68 from 31 balls. Jitesh hit the ball over the ropes five times during his stay at the crease.
Winners ONGC , on the other hand, had the first three batsmen contributing 81 runs with all crossing the twenty run point.However, it was Mayank Rawat who with his blistering 61 from 35 balls that set the title for ONGC.
Toewards the end, Saurabh Kumar scored 15 runs of five balls to make sure ONGC had the title in their pocket.
Mayank Rawat was declared the Man of the Match.
The following were the other prize winners:
Best Bowler: Pankaj Jaiswal (ONGC)
Best Batsman: Saurabh Tiwari (Reliance One)
Man of the series: Naushad Sheikh (Dr. D Y PAIL)
The presentation ceremony was attended by:Mr. Rohan Khaunte, Hon. Minister for Revenue,Mr. Jayesh Salgaonkar, Hon. Minister for Housing Board,Mr. Sauraj Lotlikar, Hon. President GCA,Mr. Daya Pagi, Hon. Secretary GCA,Dr. Ketan Bhatikar, Chairman GCA and Mr. Pednekar. 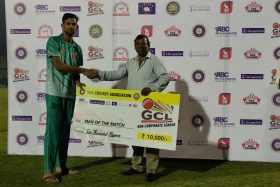 March 4, 2018 admin Comments Off on ONGC win with ease