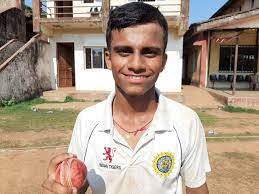 Punjab won the toss and elected to bat and Goa”s Deep kasvankar put a brake on Punjab’s movement forward with his four wicket haul from 31 overs. He gave away 135 runs in the bargain.

Shivank Desai claimed two wickets for Goa from his 13 overs and he gave away 45 runs. Yash Kasvankar took the other wicket.